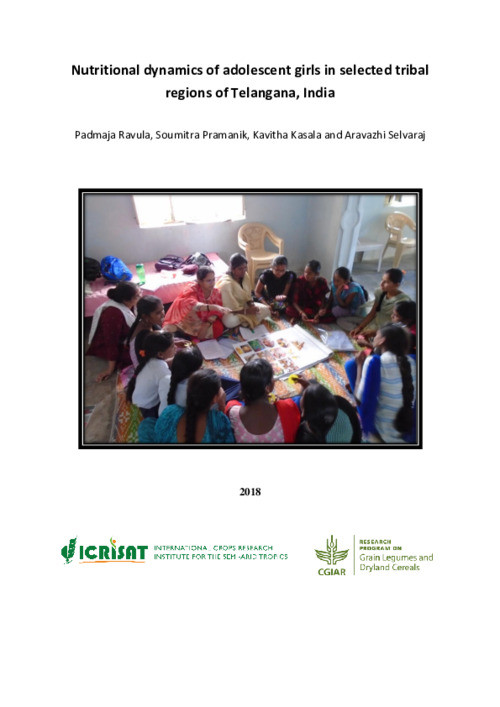 Malnutrition continues to be one of India's major human development challenge. Despite enormous economic progress achieved in the past two to three decades, malnutrition rates continue to be high especially among children and adolescents in both urban and rural India. The shining India is in shade on these important human development indicators. Adolescents in India and especially those residing in tribal regions are at high nutritional risk and face health issues such as anemia and chronic disorders. This paper investigates the prevalence, causes and socio-economic-cultural determinants of nutrition among 11 to 18 years old adolescent girls from three tribal districts of Adilabad, KomaramBheem Asifabad and Mancherial in Telangana state, India. This paper uses baseline data collected in 2017 for a project entitled, “Nutri-Food Basket” implemented in the same locations. The analysis presented in this paper is based on data from the cross sectional survey on socio-economic, demographic, diet quality (dietary diversity), haemoglobin recordings and anthropometric indicators from 1463 adolescent girls residing in the tribal districts, out of which 695 adolescent girls belong to tribal communities. The sample of adolescent girls was selected randomly from the identified districts and a tablet based survey was used to collect the required information. Anthropometric measurements were recorded using SECA instruments and haemoglobin recordings were documented using a non-invasive device – pulse co-oxymeter. Informed consent-both verbal and written - was taken prior to the survey. The analysis of the anthropometric data reveals that about 67 percent of adolescent girls in these districts are undernourished having a BMI of less than 18.5. The results revealed that stunting and thinness was highly prevalent among the tribal adolescent girls. The Z scores for BMI-for-age and height--for-age indicate approximately 23% of the adolescents were both stunted and thin, 36% were stunted only. Overweight or obesity is not of particular concern in these regions. The logistic regression analysis - using two different models- Stunted versus Non-Stunted (Model-1) and Underweight versus Normal BMI (Model-2) had very interesting results. The regression coefficients revealed that girls from tribal communities in early adolescent age (11-14 years) were less likely to be stunted when compared with late adolescent girls from the same communities; while they had a higher probability of being underweight compared to the late adolescent girls. Higher level of education of household head played a significant role in reduction of malnutrition, especially stunting as well as underweight of tribal adolescent girls (the coefficients were significantly negative in both the cases). Covariates such as availability of toilet to the households and education level of adolescent girls itself have a significant role in reducing malnutrition of adolescent girls in the tribal community.