Impact Assessment of the Village Seed Bank (VSB) program for chickpea, groundnut and pigeonpea in the Central Dry Zone of Myanmar, focusing on the production, distribution, productivity and profitability of seed of improved cultivars 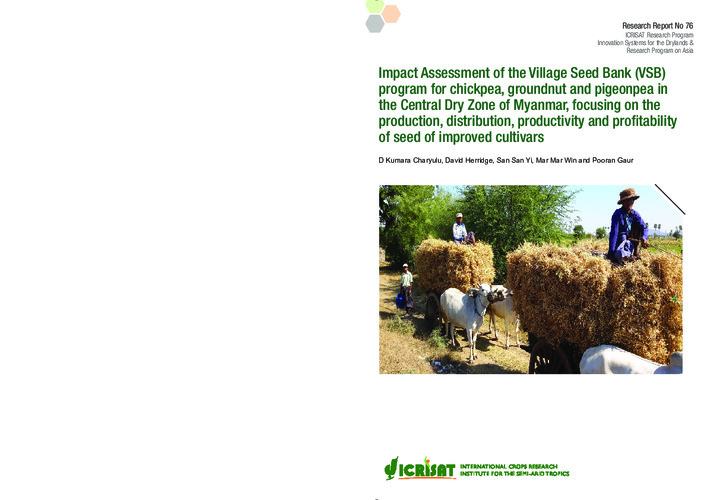 A major objective of the Australian Centre for International Agricultural Research (ACIAR)-funded MyPulses project in Myanmar was the development of improved, high-yielding varieties of pigeonpea, groundnut and chickpea through breeding and selection and their widespread adoption by farmers of the Central Dry Zone (CDZ). The village seed bank (VSB) model was implemented by the Department of Agriculture (DoA) with backstopping from MyPulses partner International Crops Research Institute for the Semi-Arid Tropics (ICRISAT) in the 2015–16 season, then expanded during 2016–17 and 2017–18. During the three years of the program, a total of 1,343 VSB farmers from 495 villages associated with 104 townships across the CDZ obtained good quality, improved cultivar seeds directly from the DoA. This impact assessment survey was commissioned to examine the extent to which the VSB program was successful in facilitating the spread and adoption of new, improved legume cultivars as well as the productivity and economic benefits of those cultivars. Since it would have been impossible to get feedback about the program from all the VSB farmers, 182 of them from 41 villages were selected at random for the survey. On average, the surveyed VSB farmers used about 50% of their land for legume cultivation. Their access to information, adequate seed storage facilities and input supplies was generally poor due to the distance from the DoA and Department of Agricultural Research (DAR) support and from seed dealers and markets. The area grown to improved VSB cultivars by the surveyed farmers increased from 154 acres in 2015–16 to 460 acres in 2017–18. Assuming that the surveyed farmers were representative of all the 1,343 VSB farmers who received seed from the DoA, that would be an equivalent of 3,400 acres in 2017–18. Ninety-six percent of the surveyed farmers rated the improved cultivars as either ‘satisfactory’, ‘good’ or ‘excellent’. Little of the seed produced by the surveyed farmers was sold to seed companies (from <1% for chickpea to 14% for pigeonpea) and 6% (pigeonpea), 27% (chickpea) and 34% (groundnut) was sold to other farmers. On average, seed was sold by the VSB farmers to 3 (groundnut), 8 (pigeonpea) and 10 other farmers (chickpea). We assumed the recipient farmers would in turn sell/give seed to a fewer number of other farmers (2 for groundnut, 4 for pigeonpea or 5 for chickpea). From those figures, we estimated the VSB program’s potential informal (farmer-to-farmer) distribution of improved cultivars during 2016–18 to be about 73,000 farmers. This number does not include the 1,343 farmers who originally received the seed from the DoA. The benefits of the VSB program ranged from access to better quality seed and improved crop and seed production knowledge to increased productivity and profitability. Grain yields from improved VSB cultivars were 34% and 43% higher for sole and intercropped pigeonpea, respectively, 55% higher for groundnut and 52% higher for chickpea. The yield benefits translated into reduced unit (basket) costs and improved net margins by 86,314 Kyats/acre and 84,625 Kyats/acre for sole and intercropped pigeonpea respectively; 177,000 Kyats/acre for groundnut and 264,125 Kyats/acre for chickpea. Lack of seed storage was seen as one of the major issues by most farmers. Nonetheless, 87% of the VSB farmers indicated their willingness to continue in the program.