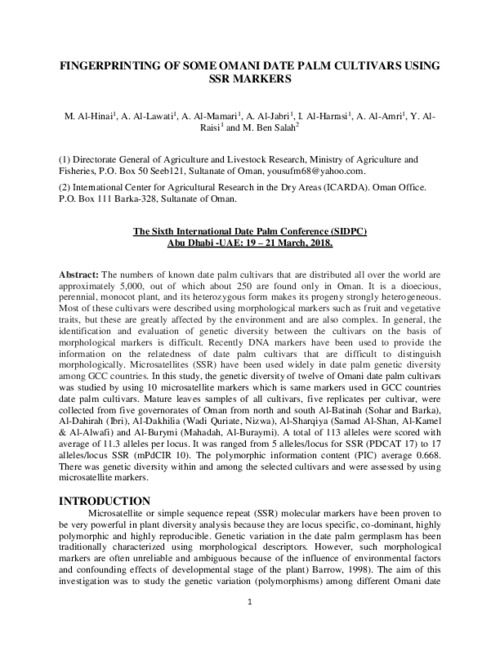 The numbers of known date palm cultivars that are distributed all over the world are approximately 5,000, out of which about 250 are found only in Oman. It is a dioecious, perennial, monocot plant, and its heterozygous form makes its progeny strongly heterogeneous. Most of these cultivars were described using morphological markers such as fruit and vegetative traits, but these are greatly affected by the environment and are also complex. In general, the identification and evaluation of genetic diversity between the cultivars on the basis of morphological markers is difficult. Recently DNA markers have been used to provide the information on the relatedness of date palm cultivars that are difficult to distinguish morphologically. Microsatellites (SSR) have been used widely in date palm genetic diversity among GCC countries. In this study, the genetic diversity of twelve of Omani date palm cultivars was studied by using 10 microsatellite markers which is same markers used in GCC countries date palm cultivars. Mature leaves samples of all cultivars, five replicates per cultivar, were collected from five governorates of Oman from north and south Al-Batinah (Sohar and Barka), Al-Dahirah (Ibri), Al-Dakhilia (Wadi Quriate, Nizwa), Al-Sharqiya (Samad Al-Shan, Al-Kamel & Al-Alwafi) and Al-Burymi (Mahadah, Al-Buraymi). A total of 113 alleles were scored with average of 11.3 alleles per locus. It was ranged from 5 alleles/locus for SSR (PDCAT 17) to 17 alleles/locus SSR (mPdCIR 10). The polymorphic information content (PIC) average 0.668. There was genetic diversity within and among the selected cultivars and were assessed by using microsatellite markers.