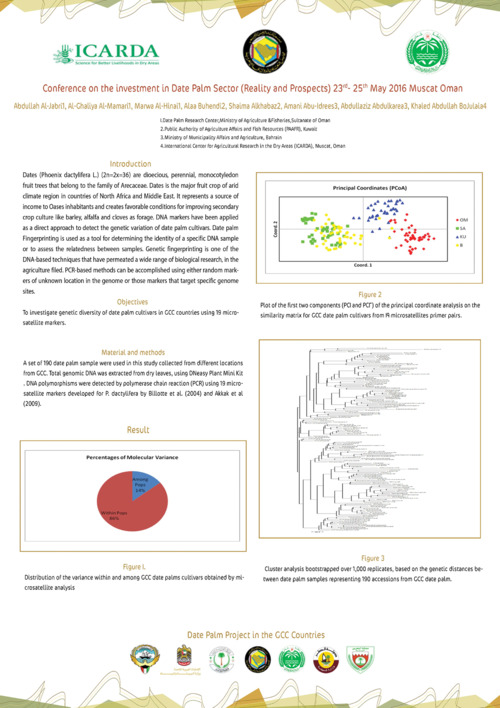 Date palm is known to have high biodiversity, with over five thousand cultivars worldwide. These cultivars have been evaluated using different vegetative and reproductive measurements. Chemical composition of fruit. The length of time needed to produce mature fruit (early; mid and late). The paper aims: to screen and develop new microsatellite markers (SSR) for date palm (Phoenix dactylifera L.), to investigate the genetic diversity of Omani germplasm and compare accessions with other countries’ germplasm and to develop new markers for gender discrimination in date palm that can be used in breeding programmes. DNA 194 samples was collected from Oman (151 female cultivars and 43 male trees) and 48 from Italy (Sanremo, Bordighera), USDA-ARS, France, Iraq, Libya, Sudan and Iran. The study developed new set of SSR markers; 11 derived from a genomic library and a further 42 derived from untested primer sequences. It also confirmed that the SSR from date palm genome are highly informative among the sets of SSR primer pairs tested. Omani accessions are related to each other but show no clear genetic differentiation between female and male cultivars. The West-Asia (Oman, Iraq and Iran) accessions were distinguished from Europe-Africa (Italy, France, Libya and Sudan) accessions reflecting a different phylogenetic history and perhaps even more than a single domestication origin. This study suggested that the PDK_30s101A locus can discriminate between male and female date palms among multiple varieties distributed across the wide range of cultivation, with a high degree of accuracy; 100% in the crosses, 96% in the Omani material and 86% in the broadest date palm germplasm.