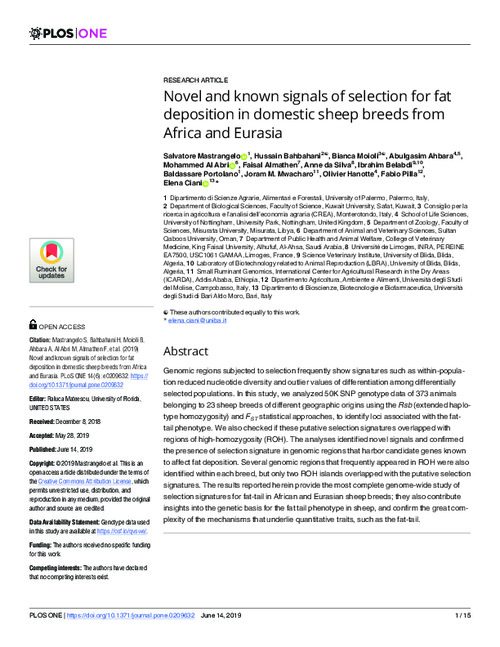 Genomic regions subjected to selection frequently show signatures such as within-population reduced nucleotide diversity and outlier values of differentiation among differentially selected populations. In this study, we analyzed 50K SNP genotype data of 373 animals belonging to 23 sheep breeds of different geographic origins using the Rsb (extended haplotype homozygosity) and FST statistical approaches, to identify loci associated with the fattail phenotype. We also checked if these putative selection signatures overlapped with regions of high-homozygosity (ROH). The analyses identified novel signals and confirmed the presence of selection signature in genomic regions that harbor candidate genes known to affect fat deposition. Several genomic regions that frequently appeared in ROH were also identified within each breed, but only two ROH islands overlapped with the putative selection signatures. The results reported herein provide the most complete genome-wide study of selection signatures for fat-tail in African and Eurasian sheep breeds; they also contribute insights into the genetic basis for the fat tail phenotype in sheep, and confirm the great complexity of the mechanisms that underlie quantitative traits, such as the fat-tail.