Socioeconomic, biophysical, and environmental impacts of raised beds in irrigated wheat: A case study from Egypt 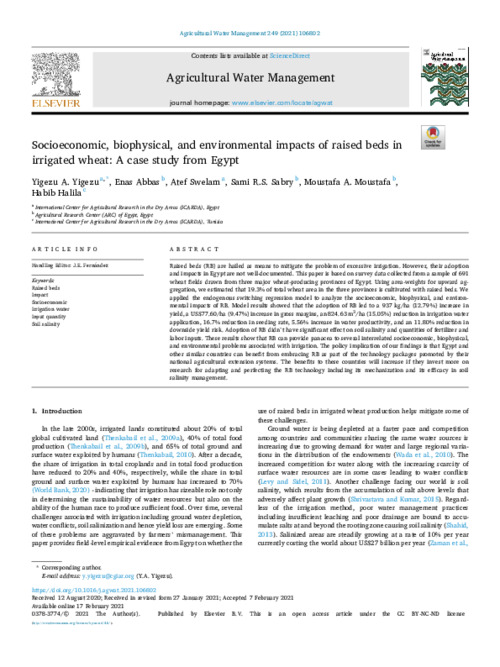 Raised beds (RB) are hailed as means to mitigate the problem of excessive irrigation. However, their adoption and impacts in Egypt are not well-documented. This paper is based on survey data collected from a sample of 691 wheat fields drawn from three major wheat-producing provinces of Egypt. Using area-weights for upward aggregation, we estimated that 19.3% of total wheat area in the three provinces is cultivated with raised beds. We applied the endogenous switching regression model to analyze the socioeconomic, biophysical, and environmental impacts of RB. Model results showed that the adoption of RB led to a 937 kg/ha (12.79%) increase in yield, a US$77.60/ha (9.47%) increase in gross margins, an 824.63 m3/ha (15.05%) reduction in irrigation water application, 16.7% reduction in seeding rate, 5.56% increase in water productivity, and an 11.80% reduction in downside yield risk. Adoption of RB didn’t have significant effect on soil salinity and quantities of fertilizer and labor inputs. These results show that RB can provide panacea to several interrelated socioeconomic, biophysical, and environmental problems associated with irrigation. The policy implication of our findings is that Egypt and other similar countries can benefit from embracing RB as part of the technology packages promoted by their national agricultural extension systems. The benefits to these countries will increase if they invest more on research for adapting and perfecting the RB technology including its mechanization and its efficacy in soil salinity management.