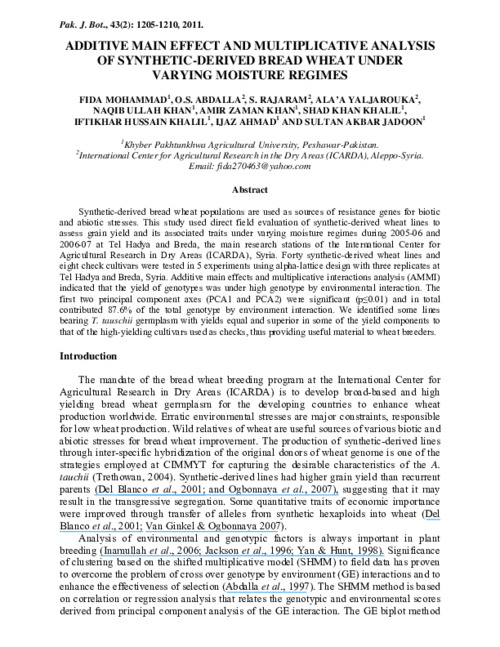 Synthetic-derived bread wheat populations are used as sources of resistance genes for biotic and abiotic stresses. This study used direct field evaluation of synthetic-derived wheat lines to assess grain yield and its associated traits under varying moisture regimes during 2005-06 and 2006-07 at Tel Hadya and Breda, the main research stations of the International Center for Agricultural Research in Dry Areas (ICARDA), Syria. Forty synthetic-derived wheat lines and eight check cultivars were tested in 5 experiments using alpha-lattice design with three replicates at Tel Hadya and Breda, Syria. Additive main effects and multiplicative interactions analysis (AMMI) indicated that the yield of genotypes was under high genotype by environmental interaction. The first two principal component axes (PCA1 and PCA2) were significant (p <= 0.01) and in total contributed 87.6% of the total genotype by environment interaction. We identified some lines bearing T. tauschii germplasm with yields equal and superior in some of the yield components to that of the high-yielding cultivars used as checks, thus providing useful material to wheat breeders.