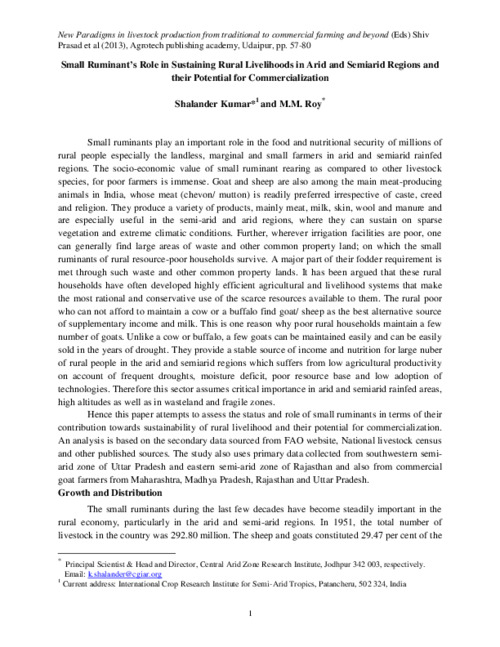 Kumar Shalander, Murari Mohan Roy. (30/11/2013). Small Ruminant’s Role in Sustaining Rural Livelihoods in Arid and Semiarid Regions and their Potential for Commercialization, in "New Paradigms in livestock production from traditional to commercial farming and beyond. ". Rajasthan, India: Agrotech publishing academy.

Small ruminants play an important role in the food and nutritional security of millions of rural people especially the landless, marginal and small farmers in arid and semiarid rainfed regions. The socio-economic value of small ruminant rearing as compared to other livestock species, for poor farmers is immense. Goat and sheep are also among the main meat-producing animals in India, whose meat (chevon/ mutton) is readily preferred irrespective of caste, creed and religion. They produce a variety of products, mainly meat, milk, skin, wool and manure and are especially useful in the semi-arid and arid regions, where they can sustain on sparse vegetation and extreme climatic conditions. Further, wherever irrigation facilities are poor, one can generally find large areas of waste and other common property land; on which the small ruminants of rural resource-poor households survive. A major part of their fodder requirement is met through such waste and other common property lands. It has been argued that these rural households have often developed highly efficient agricultural and livelihood systems that make the most rational and conservative use of the scarce resources available to them. The rural poor who can not afford to maintain a cow or a buffalo find goat/ sheep as the best alternative source of supplementary income and milk.