Demonstration of an Integrated Pest Management Program for Wheat in Tajikistan 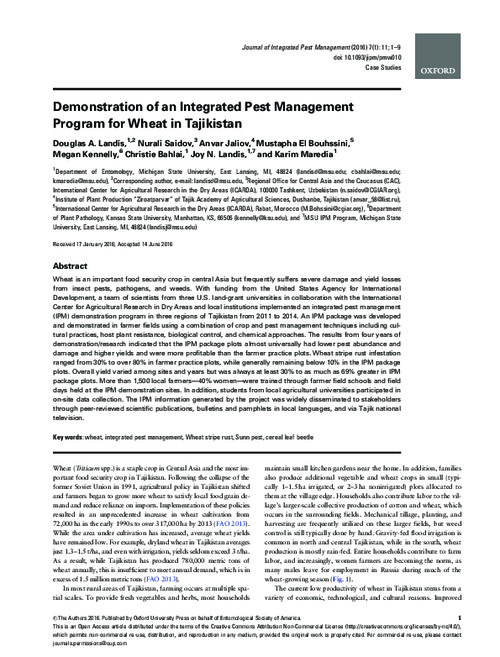 Wheat is an important food security crop in central Asia but frequently suffers severe damage and yield losses from insect pests, pathogens, and weeds. With funding from the United States Agency for International Development, a team of scientists from three U.S. land-grant universities in collaboration with the International Center for Agricultural Research in Dry Areas and local institutions implemented an integrated pest management (IPM) demonstration program in three regions of Tajikistan from 2011 to 2014. An IPM package was developed and demonstrated in farmer fields using a combination of crop and pest management techniques including cul- tural practices, host plant resistance, biological control, and chemical approaches. The results from four years of demonstration/research indicated that the IPM package plots almost universally had lower pest abundance and damage and higher yields and were more profitable than the farmer practice plots. Wheat stripe rust infestation ranged from 30% to over 80% in farmer practice plots, while generally remaining below 10% in the IPM package plots. Overall yield varied among sites and years but was always at least 30% to as much as 69% greater in IPM package plots. More than 1,500 local farmers—40% women—were trained through farmer field schools and field days held at the IPM demonstration sites. In addition, students from local agricultural universities participated in on-site data collection. The IPM information generated by the project was widely disseminated to stakeholders through peer-reviewed scientific publications, bulletins and pamphlets in local languages, and via Tajik national television.