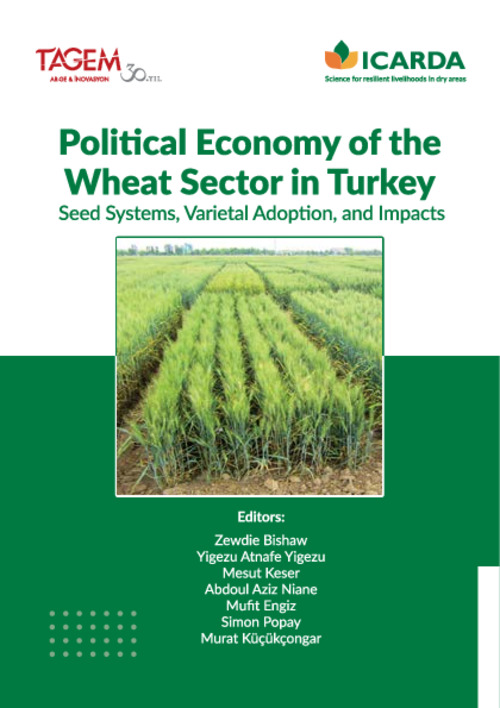 In Turkey, wheat is the most important crop in terms of land area, volume of production, and monetary value. Despite varied climatic and agro-ecological conditions, wheat is grown in almost all areas of the country. Although a significant proportion of wheat produced is used for domestic consumption, it plays a dominant role as a source of cash accounting; on average, making up to 45% of household income in some areas where it is grown for market. Over the last 30 years, wheat production has remained largely stable, in the range of 16 to 22 million tons, with some annual variations. Wheat area has decreased from 9.3 million hectares in 1988 to 6.8 million hectares in 2019. During the same period, there has been a 27% increase in the average yield – from 1.88 tons ha-1 to 2.78 tons ha-1, which has almost fully offset the reduction in total wheat area, leading to only a slight (7%) reduction in total wheat grain production. In 2019, although Turkey ranked eleventh in global total wheat production, it was the number one wheat flour and bourghul exporting country, with a total export of over 3.34 million tons. Turkey is also a major producer of pasta and related products, with a total production volume of 1.3 million tons in 2016. The establishment, in the 1930s, of regional agricultural research institutes responsible for crop improvement, particularly cereals (wheat, barley), and state farms responsible for production and distribution of seeds of new varieties to farmers, laid the foundation for an organized seed sector in Turkey. The National Wheat Release and Training Project that embarked in 1967 contributed to the start of a ‘green revolution’ in the country, which gained momentum in the 1970s and continued, though at a slower pace, thereafter. In 1991, the General Directorate of Agricultural Research and Policies was established as a central coordinating body of all national agricultural research, where 12 agricultural research institutes were involved in wheat breeding and research in different parts of the country representing different agro-ecologies.