Relay Cropping of Cotton in Standing Wheat: An Innovative Approach for Enhancing the productivity and income of Small Farm 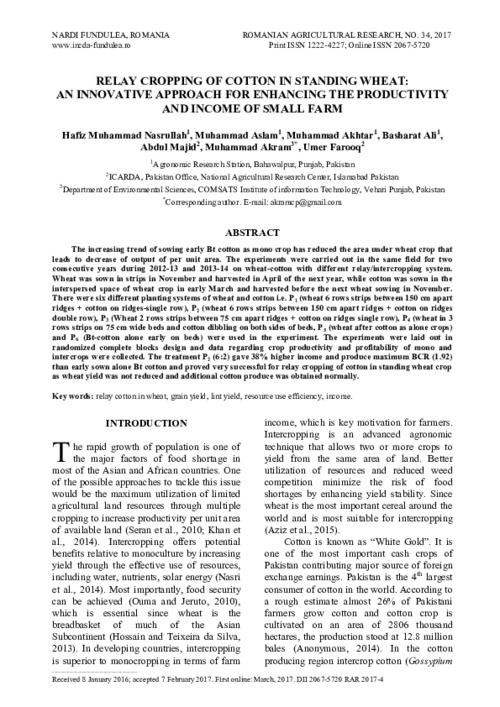 The increasing trend of sowing early Bt cotton as mono crop has reduced the area under wheat crop that leads to decrease of output of per unit area. The experiments were carried out in the same field for two consecutive years during 2012-13 and 2013-14 on wheat-cotton with different relay/intercropping system. Wheat was sown in strips in November and harvested in April of the next year, while cotton was sown in the interspersed space of wheat crop in early March and harvested before the next wheat sowing in November. There were six different planting systems of wheat and cotton i.e. P1 (wheat 6 rows strips between 150 cm apart ridges + cotton on ridges-single row), P2 (wheat 6 rows strips between 150 cm apart ridges + cotton on ridges double row), P3 (Wheat 2 rows strips between 75 cm apart ridges + cotton on ridges single row), P4 (wheat in 3 rows strips on 75 cm wide beds and cotton dibbling on both sides of beds, P5 (wheat after cotton as alone crops) and P6 (Bt-cotton alone early on beds) were used in the experiment. The experiments were laid out in randomized complete blocks design and data regarding crop productivity and profitability of mono and intercrops were collected. The treatment P2 (6:2) gave 38% higher income and produce maximum BCR (1.92) than early sown alone Bt cotton and proved very successful for relay cropping of cotton in standing wheat crop as wheat yield was not reduced and additional cotton produce was obtained normally.