Meeting the Challenge of Yellow Rust in Cereal Crops 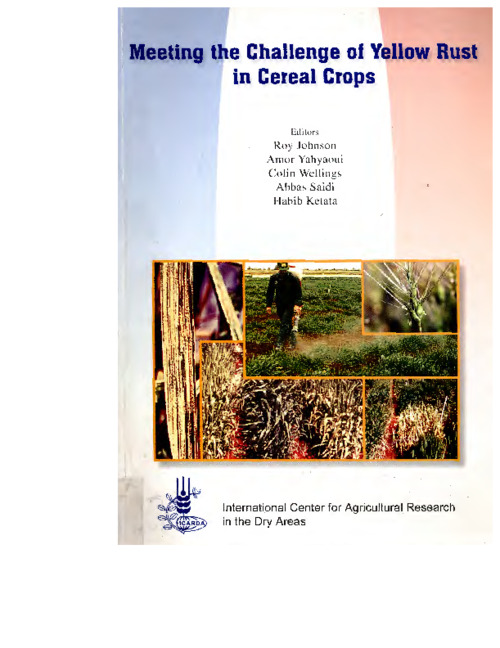 Yellow rust is an important disease of wheat, particularly in the Caucasus, Central and West Asia, the Nile Valley, and the Horn of Africa, where it has caused recurrent severe damage since time immemorial. Epidemics continue to cause severe losses. Recently, 30.40% yield losses have been recorded in major wheat-producing areas in Azerbaijan, Kyrgyzstan, and southern Kazakhstan. In Uzbekistan. more than 60% of the wheat area is sprayed with fungicides during the rainy cool season to combat the disease. Scientists, breeders, policy advisors. and farmers must join to counter the yellow rust problem. The apparent increased frequency and severity of yellow rust epidemics raises questions about the nature of the disease, the factors that contribute to epidemic development. and variation in disease response of wheat cultivars. Comprehensive information on pathogen virulence and variation. and epidemiological information on pathogen move~nents is critical. It could provide the basis for the (I) development of an early warning system that might reduce the frequency and magnitude of losses; (2) identification and subsequent management of susceptible cultivars; and (3) development of varieties with durable resistance. Using resistant cultivars is the best strategy for disease control, as it carries no additional cost to farmers and is environmentally safe Some improved cultivars. with resistance based on a single race-specific gene, or combinations of genes. are currently grown in large areas in various countries. However, the genes are vulnerable to pathogen plasticity. and their longevity can vary, from rapid vulnerability to relative durability. It is likely that most specific resistances, whether based on a single major gene or combination of major genes, will sooner or later succumb to new adaptive pathotypes if careful deployment is not practiced. The diversity of the pathogen population poses a great challenge. but more information is emerging. slowly. about durable resistance to yellow rust of wheat. Evidence suggests that adequate levels of resistance could be obtained with a few additive genes, each having a small to moderate effect. Despite our advances in knowledge, we need to improve the application of programs to achieve durable resistance. I hope that in collaboration with our national research partners we can find a 'durable' solution to the yellow rust problem. Recognizing the importance of yellow rust in the region, the First Regional Yellow Rust Conference for Central and West Asia and North Africa (CWANA) was organized by the International Center for Agricultural Research in the Dry Areas (ICARDA) and the Seed and Plant Improvement Institute (SPII) of the Islamic Republic of Iran. Conference participants were able to discuss and share the latest inforn~ation on wheat and barley yellow rust. This volume contains the text of scientific presentations made at the Conference