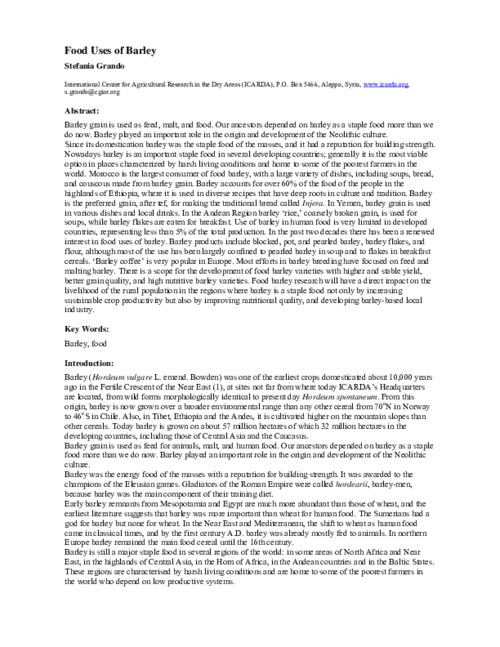 Barley grain is used as feed, malt, and food. Our ancestors depended on barley as a staple food more than we do now. Barley played an important role in the origin and development of the Neolithic culture. Since its domestication barley was the staple food of the masses, and it had a reputation for building strength. Nowadays barley is an important staple food in several developing countries; generally it is the most viable option in places characterized by harsh living conditions and home to some of the poorest farmers in the world. Morocco is the largest consumer of food barley, with a large variety of dishes, including soups, bread, and couscous made from barley grain. Barley accounts for over 60% of the food of the people in the highlands of Ethiopia, where it is used in diverse recipes that have deep roots in culture and tradition. Barley is the preferred grain, after tef, for making the traditional bread called Injera. In Yemen, barley grain is used in various dishes and local drinks. In the Andean Region barley ‘rice,’ coarsely broken grain, is used for soups, while barley flakes are eaten for breakfast. Use of barley in human food is very limited in developed countries, representing less than 5% of the total production. In the past two decades there has been a renewed interest in food uses of barley. Barley products include blocked, pot, and pearled barley, barley flakes, and flour, although most of the use has been largely confined to pearled barley in soup and to flakes in breakfast cereals. ‘Barley coffee’ is very popular in Europe. Most efforts in barley breeding have focused on feed and malting barley. There is a scope for the development of food barley varieties with higher and stable yield, better grain quality, and high nutritive barley varieties. Food barley research will have a direct impact on the livelihood of the rural population in the regions where barley is a staple food not only by increasing sustainable crop productivity but also by improving nutritional quality, and developing barley-based local industry.