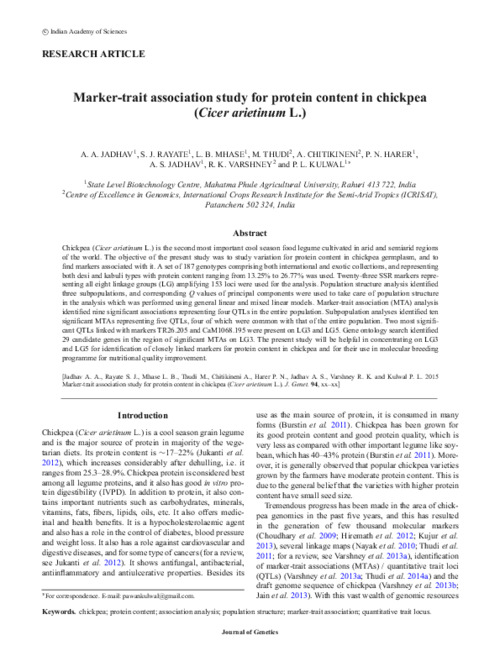 Chickpea (Cicer arietinum L.) is the second most important cool season food legume cultivated in arid and semiarid regions of the world. The objective of the present study was to study variation for protein content in chickpea germplasm, and to find markers associated with it. A set of 187 genotypes comprising both international and exotic collections, and representing both desi and kabuli types with protein content ranging from 13.25% to 26.77% was used. Twenty-three SSR markers representing all eight linkage groups (LG) amplifying 153 loci were used for the analysis. Population structure analysis identified three subpopulations, and corresponding Q values of principal components were used to take care of population structure in the analysis which was performed using general linear and mixed linear models. Marker-trait association (MTA) analysis identified nine significant associations representing four QTLs in the entire population. Subpopulation analyses identified ten significant MTAs representing five QTLs, four of which were common with that of the entire population. Two most signifi- cant QTLs linked with markers TR26.205 and CaM1068.195 were present on LG3 and LG5. Gene ontology search identified 29 candidate genes in the region of significant MTAs on LG3. The present study will be helpful in concentrating on LG3 and LG5 for identification of closely linked markers for protein content in chickpea and for their use in molecular breeding programme for nutritional quality improvement.