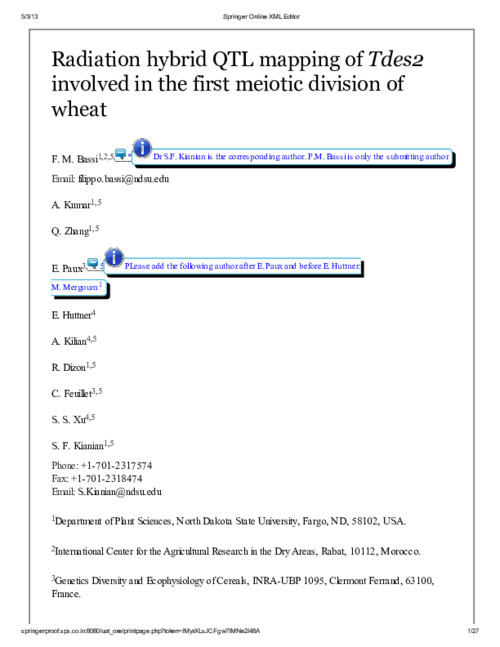 Since the dawn of wheat cytogenetics, chromosome 3B has been known to harbor a gene(s) that, when removed, causes chromosome desynapsis and gametic sterility. The lack of natural genetic diversity for this gene(s) has prevented any attempt to fine map and further characterize it. Here, gamma radiation treatment was used to create artificial diversity for this locus. A total of 696 radiation hybrid lines were genotyped with a custom mini array of 140 DArT markers, selected to evenly span the whole 3B chromosome. The resulting map spanned 2,852 centi Ray with a calculated resolution of 0.384 Mb. Phenotyping for the occurrence of meiotic desynapsis was conducted by measuring the level of gametic sterility as seeds produced per spikelet and pollen viability at booting. Composite interval mapping revealed a single QTL with LOD of 16.2 and r2 of 25.6 % between markers wmc326 and wPt-8983 on the long arm of chromosome 3B. By independent analysis, the location of the QTL was confirmed to be within the deletion bin 3BL7-0.63-1.00 and to correspond to a single gene located ~1.4 Mb away from wPt-8983. The meiotic behavior of lines lacking this gene was characterized cytogenetically to reveal striking similarities with mutants for the dy locus, located on the syntenic chromosome 3 of maize. This represents the first example to date of employing radiation hybrids for QTL analysis. The success achieved by this approach provides an ideal starting point for the final cloning of this interesting gene involved in meiosis of cereals.