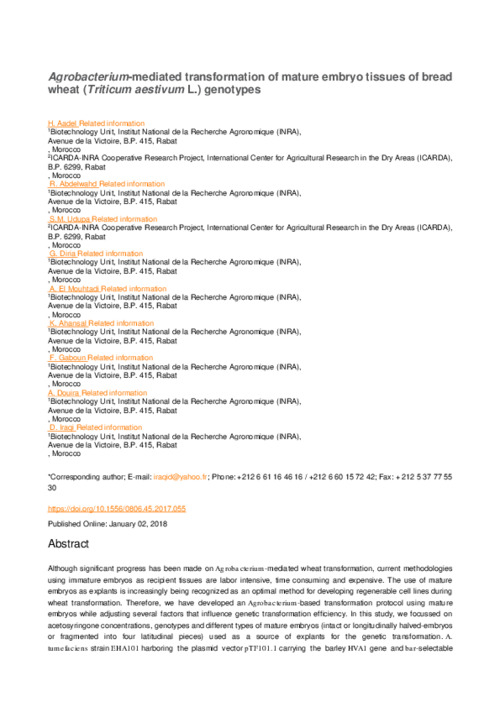 Although significant progress has been made on Agrobacterium-mediated wheat transformation, current methodologies using immature embryos as recipient tissues are labor intensive, time consuming and expensive. The use of mature embryos as explants is increasingly being recognized as an optimal method for developing regenerable cell lines during wheat transformation. Therefore, we have developed an Agrobacterium-based transformation protocol using mature embryos while adjusting several factors that influence genetic transformation efficiency. In this study, we focussed on acetosyringone concentrations, genotypes and different types of mature embryos (intact or longitudinally halved-embryos or fragmented into four latitudinal pieces) used as a source of explants for the genetic transformation. A. tumefaciens strain EHA101 harboring the plasmid vector pTF101.1 carrying the barley HVA1 gene and bar-selectablemarker gene were used. Mature intact-embryos and longitudinally halved-embryos yielded the highest number of putative transgenic plantlets on the selection medium. However, no plantlets were obtained from latitudinal fragmented mature embryos. ‘Amal’ and ‘Rajae’ genotypes regenerated the highest number of putative transgenic plants and 200 μM acetosyringone was found to be the optimal concentration for their transformation. A total of 47 transgenic plants were selected with 11 plantlets showing resistance to leaf painting. Molecular analysis revealed that 1% and 0.66% of T0 regenerated plantlets were successfully transformed and carried the HVA1 gene for the ‘Amal’ and ‘Rajae’ genotypes, respectively. Additional analysis shows the transgene is stably inherited in the T1 generation. Based on the results, we conclude that among the influencing factors tested, genotypes, mature embryo explant types and acetosyringone concentration contribute significantly to the success of bread wheat transformation.